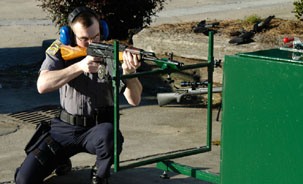 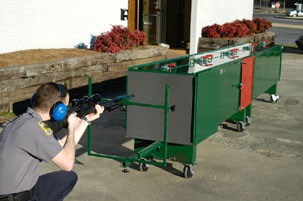 This system is suitable for capturing high caliber/high velocity rounds. In the images you can see the X-Y axis bore centering device to ensure proper bore alignment. On request, different weapons holder suitable for every specified application. The range is the following:

The examples below show various type, caliber, weight and velocity bullets, which were fired into a conventional water filled bullet recovery tank costing US$ 30,000. When compared to the same type rounds that were fired from the very same firearms, into our recovery system, which costs far less than the conventional water tank system and, as you can see, produces a vastly superior ballistic/forensic sample.

All ammunition shown on this page, as well as all of the ammunition fired during testing and development was full power, factory-loaded ammunition, not downloads!

Some of the examples captured (click on images for larger view)

All hand-loads that were used were loaded to the maximum allowable powder charge. This was done to demonstrate that it is no longer necessary to bother with the hassle, danger and time consuming nature of using downloading for forensic testing.

All of the recovered samples shown on this web site were fired at point-blank range - 4 feet, or less. This was done to demonstrate the capability of this system to capture various types of rounds, at their maximum velocity and energy levels.

Other examples captured by the DPRS Rifle (click on images for larger view).

All samples shown above are real full factory loadings and can be demonstrated upon request.

The samples shown on this web site are just a small demonstration of the capability of this recovery method. However, it is also capable of capturing ammunition that is well outside the scope of what appears above. Want an example?

Following are four pictures of recent tests we have made with our standard model DP-07.

In the first picture (up-left) we see a .50 cal shot fired with a BMG. As you can see, it was stopped and recovered in pristine condition, almost with no sign of the firing.

In the following pictures (up-right and bottom-left) a size comparison is made between a .50 cal, a 7,62 round and a 23 mm. Why this comparison? Because we succeded in stopping and recovering a 23 mm round, again in pristine condition (see picture bottom-right).