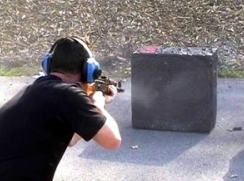 3-D IPSTM is a patent pending protection system with scores of military and commercial protection applications. Depending on the stack thickness, our interlocking system will stop anything from AK-47 to tank rounds. The lightweight composite allows maximum portability in the field. Ballistics Research, Inc., after years of development, produces an unparalleled force protection system made of our Advanced Anti Ballistics Composite (AABC), the only material in existence that actually gains strength with incoming rounds.

Why is 3-D IPSTM such a revolutionary improvement? Most conventional protection units available to the military and corporate worlds (like sandbags or concrete) are non-portable, or they degrade rapidly under sustained fire. Our AABC material actually becomes stronger with multiple hits. In fact, each of the 3-D IPS blocks is capable of absorbing thousands of rounds of machine gun fire without failure

Manufacture of the AABC material is not limited to the cubic modules described in the following section. It can be produced in any shape in which its properties are desired. For example, an office desk produced wholly or partially from AABC could be utilized for personal protection in the event of attack. Interlocking cubic modules made from AABC, the patent-pending "building blocks" of the 3-D IPS, are produced in virtually any size. For example, some applications may call for cubes that measure 10" X 10" X 10", while other applications may be better served by a system that utilizes very large modules of one cubic yard (36").

Each module interlocks on all six sides with any other cube of the same size, affording the installer speed of assembly and flexibility in configuration. No tools or formal instructions are required for assembly, and every cube of the same size is identical to all its mates; There are no special corner modules or end caps. Interlocked cubes form extremely strong structures built to any desired size and configuration, with walls of any thickness. After use, the modules are disassembled and stored or transported for reuse. 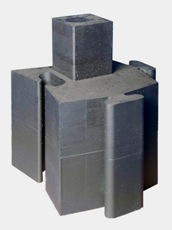 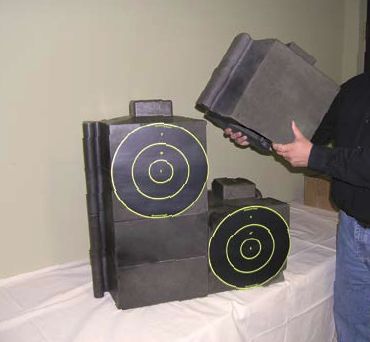 The following videos show this incredible material in action (click on thumbnail).

Following, you can see the other winning feature of our block technology: ease of assembling and disassembling.

Please note that we have added a little timer on the bottom left of the screen.

This way it will be visible the real time of shaping customized structures.

One of our most recent test. This included some various types of blocks positioned at about 10 meters from 100 kg. of ANFO (Ammonium Nitrate Fuel Oil). Not only the blocks didn't suffer any damage, but they were able to stand still, in their position, virtually ignoring the blast's shock wave.

Yet another video of a firing test performed in the Middle East operation zone. This test shows various calibres fired at our blocks including .50 Cal API ammunition. See for yourself how our blocks could easily stop them.

Finally, a National News broadcast talks about our protection system.

To watch this videos in high definition without the need of an internet connection, please click here..... 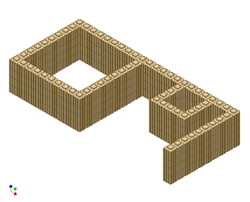 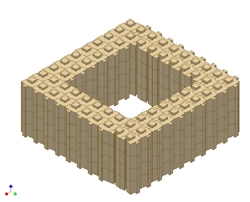 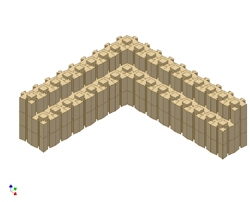 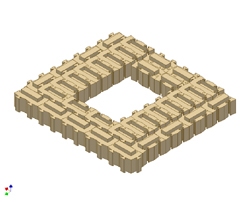 AABC (12" thickness) has been successfully tested against the following weapons:

Additionally, AABC (in 12" thickness) has been successfully tested against the following blast ordnance:

Some pictures of recent tests (some of the following images are available in high definition by clicking on the pictures themselves):

The realities of today's violent world require extraordinary efforts to protect people, buildings, and myriad other potential terrorist targets such as oil pipelines and nuclear power plants. Previously available physical security barriers are handicapped by numerous and significant shortcomings. In response to these needs, Ballistics Research, Inc., offers Advanced Anti-Ballistic Composite (AABC) and the 3-D Interlocking Protection System (3-D IPS), which may overcome those shortcomings and prove vitally useful to security and defense efforts in the age of terrorism. The new material described here, especially when used in the form of the interlocking modular system, can be expected to provide a higher level of physical security for government, commercial and private facilities and the people and assets within, along with marked advantages on the battlefield and in the security of those in and around zones of chronic conflict.

Soldiers, especially in close combat, need the best possible mobile bunkers. They need a way to quickly assemble highly protective cover that is durable and easily broken down for rapid mobility. Domestic buildings, facilities, and the people within need protection. Government buildings, financial and health institutions, chemical plants, military outposts both at home and abroad, as well as other potential targets too numerous to name, badly need greater protection against bomb blasts, rocket-propelled grenades, automatic weapons fire and other means of attack.

Petroleum production and distribution units and systems need protection. Oil field facilities, refineries, thousands of miles of petroleum pipelines, and thousands of pumping stations must be secured. One or two successful strikes against the world's energy system could conceivably send the world's economy reeling and compromise the nation's capacity for defense.

The conventional types of protective barriers and barrier materials now in use are plagued with a variety of shortcomings.

These problems can be disastrous when the need arises for quick construction of bunkers, for example in an urban warfare setting.

AABC is a new, patent-pending, composite polymer material with a very high strength-to-weight ratio. It is capable of stopping and safely absorbing projectiles from small arms fire and every kind of conventional (non-nuclear) explosive device. Typically, materials used to shield against attack, especially those not too heavy for practical transport and installation, degrade under fire. AABC, by contrast, absorbs and encapsulates projectiles, and actually gains density as a result. In testing, several small blocks of AABC that have each absorbed more than 6,000 rounds of various weapons fire and shotgun slugs show that the trapped projectiles actually increase the material's strength and protective character.

Projectiles that strike AABC directly in line with previous hits continue to be absorbed into the material, where they "back-stack". The result of back-stacked bullets is shown in the following photos. Nine .45 caliber slugs that were fired one after another into a single point on a piece of AABC are shown.

Barriers of AABC 12" and thicker provide protection against the most common explosive and small arms threats. The material's capacity to safely absorb projectiles is not compromised by any kind of explosive shock. A 12" cube of the material weighs approximately 20-30 kg., depending on the density required for its specific application.

The 3-D IPS may be used to shield